Sheila Firestone: Composer, M.S. Ed. has been a student of musical composition since 1987. 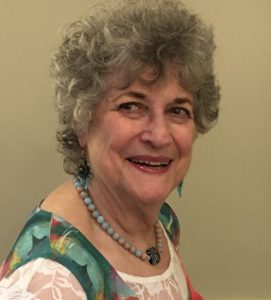 Most recent works include, Lakeside Walk with Joe, orchestral and piano versions, and The Forest Primeval for strings and piano. Miriam and the Women of the Desert, a musical journey into the Exodus, is told through the eyes of Miriam the Propehtess  was premiered in 2019. Waters of Transformation, was the second place winner  in the  first NLAPW Vinnie Rheam Music Award Competition; Third World E-Waste Graveyards,  The Grandchildren’s Suite, The Pandora Triptych, preludes, choral pieces and Ancient Blue Threads, a collection of  original sacred songs and settings of traditional words with original music.

Sheila served two terms as a  Past President of the Boca Raton Branch of the National League of American Pen Women. She currently serves as the Membership Chair and Outreach Person.  In 2019 Sheila was named the Pen Woman of the Year for the Florida State NLAPW. Sheila earned an Exceptional Achievement Award for her opera Miriam and the Women of the Desert in 2019.

She has served as the Secretary for the State of Florida for the National League of American Pen Women, and First Vice President for the Florida NLAPW.

She is a Patroness of Sigma Alpha Iota, a female music fraternity, and is a member of the SAI Composer’s Bureau. Sheila is a contributing composer to the Delian Society, an international online organization of new tonal  music composers.

Her instrumental works have been performed in Washington, DC, Seattle Washington, France and Japan.

The Pen Women Press has published Abraham Lincoln, a choral piece in their commemorative anthology, Happy Birthday, Mr. Lincoln. Her works are heard in concert and in places of worship. An  article  by Sheila appears   in Creative Genius: The inspirational Wisdom of Pen Women.

The Metz concerto, a work by the Delian Society members to which Sheila has contributed, was performed on November 22, 2009, in Seattle, Washington. The Robin Hood Suite was performed in Japan.

She specialized in Communications, Future Problem Solving, Thinking Skills, Creativity, and Music, Words, Opera, a program where children developed their own musicals . She was also a Great Books Leader and an Editor of the Gifted Newsletter. Sheila was named The ESE (Exceptional Student Education) teacher of the Year by Chapter 121 of the Council for Exceptional Children in 1989. In 1991 she received a “Teacher of the Year,” Award for the Miami Dade County Public School Board.

Sheila  has received many grants and awards for her classes. Firestone offers educational workshops featuring her teaching materials and group presentations to youth and other groups.

Sheila founded Songs For A New Day in 1990 publishing an interdisciplinary /whole-language-teaching program. She served as Chairperson for the Dade County Very Special Arts Festivals from 1990-94. In 1996. Firestone was named Educator of Note by the Miami Young Patronesses of the Opera. She served as Patroness President to the University of Miami’s, Sigma Alpha Iota National Music Sorority. Her works have been performed in concert by the UM chapter and The Miami-Dade County Youth Symphony.Her children’s ballet has been performed by talented school programs and workshops have been given to many other youth groups. She presented at many Conferences on Gifted Education

The National League of American Pen Women is an organization of published Writers, Artists, and Composers.. NLAPW.  Sheila has served as First Vice President of the Fla. NLAPW.

She served two terms,  from 2014-2018, as President of the Boca Raton National League of American Pen Women. Among their  various outreach programs into the community this group offers workshops to area youth as well writing, art or music study scholarships to deserving students. She is the current Music, Outreach and Membership Chairperson.